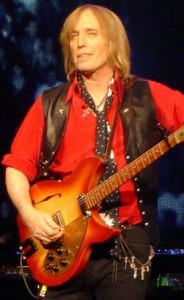 I’m posting this on behalf of the Owner, please be aware of these instruments in case they start showing up for sale..

Unfortunately half of my collection of guitars, which I have collected and hand picked for more than 25 years, has been stolen in Ystad, very south in Sweden. Most of the 15 stolen guitars are from special series, two Custom Shops are very limited. What is really outstanding is the condition of almost all instruments. Most of them are dead mint, 10,0 out of 10.

Examples of the guitars:

Here is information about all stolen guitars:

Please spread the information about the burglary and the lost guitars to your partners and business contacts. A generous reward will be given to information that will give me my guitars back!!

Please observe that there are only 10 guitars on the picture, but as you can see 15 instruments were stolen!!

If you have any information about the instruments, or have heard any rumours, please come back to me. Your help to get the guitars back to my will be highly appreciated and generously rewarded!! 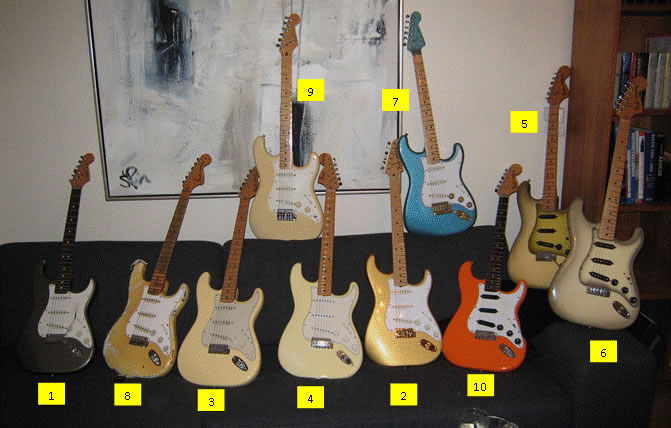 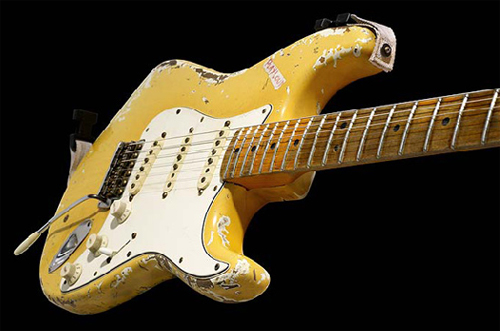 A well-known Yorkshire father and son business partnership have been given suspended prison sentences for handling stolen guitars.

Richard and Justin Harrison, dealing in rare and old musical instruments, admitted to handling stolen vintage guitars worth over Â£40,000.

He was given a 12 month sentence, suspended for 18 months and 200 hours unpaid work.

He was given a six month sentence, suspended for 18 months, 200 hours unpaid work and told pay Â£2,500 court costs.

At the time of the offences they owned well known company Music Ground and had shops in Leeds, Manchester and London and international customers. They were both charged with handling stolen goods and intending or assisting in the retention or disposal of those items between October 7 2006 and March 5 last year.

The guitars were part of a haul of 157 guitars stolen in two burglaries in Verona, Italy, in October 2006 and which had an estimated value in excess of Â£1million.

Michael Rawlinson, for Justin, said he had not known the gutiars were stolen when he first received them but had â€œburied his head in the sandâ€. Nigel Hamilton, for Richard, said he had given the guitars to people look after when he realised they were stolen but was arrested nine months later when he was still in possession of them.

Judge Christopher Batty described their actions â€œdisgustingâ€. He said: â€œWe are not talking about throw-away items.

The pair now face an investigation under the Proceeds of Crime Act.

Sixty-one rare and vintage guitars worth up to Â£50,000 each are being searched for by West Yorkshire Police after they were stolen.

Police want to track down the rare Fender, Gibson, Gretsch and Rickenbacker models which are missing.

A total of 157 guitars worth more than Â£1m were stolen five years ago, 96 have since been recovered.

Two men aged 63 and 41 have been charged with handling stolen goods in connection with the investigation.

Police have released images of theÂ 61 missing guitars and their serial numbers.

Det Con Chris Lord from West Yorkshire Police said: “Anyone found with one of these guitars in their possession could be charged with handling stolen goods.

“I would encourage anyone who suspects they have one of these guitars to check the serial numbers as soon as possible.”

The police said they were unable to provide more information about the burglary because of legal proceedings.

Anyone with information is urged to contact the police.

A well known Yorkshire father and son business partnership dealing in rare and old musical instruments and equipment have been accused of handling stolen guitars worth Â£170,000 (c.$260,000).

At the time of the alleged offences Richard and Justin Harrison owned a well known company called Music Ground. They had shops in Leeds, Manchester and London as well as many international customers.

Mrs Lisa Carlton, the prosecutor, said they were both charged with handling stolen goods and intending or assisting in the retention or disposal of those items between October 7 2006 and March 5 2009.

The 26 guitars, subject of the charges against the father and son, are believed to be part of a haul of 157 guitars stolen in two burglaries in Verona, Italy, in October 2006 and which had an estimated value in excess of Â£1m.

Richard Harrison, 63, and his 40 year old son Justin, both entered preliminary pleas of â€˜not guiltyâ€™ to the charge.

In its advertising and promotional material, Music Ground used to claim that it was â€œEuropeâ€™s No 1? supplier of rare and vintage guitars.