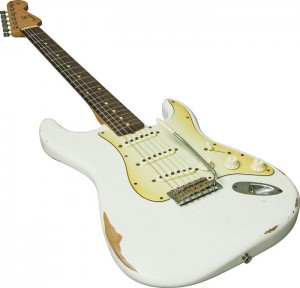 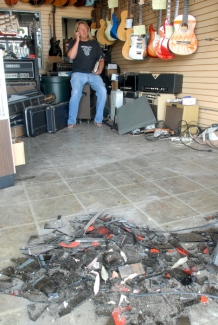 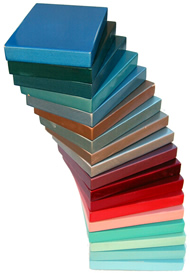 Even if you aren’t interested in the colours, it’s worth having a look for the lovely photography.

In Curtis’ own words…

These are pictures of my sample blocks of Fender 60’s colors. I attempted to create as accurate as possible a representation of the colors Fender used in the 60’s. I used Dupont paint and the colors are mixed from the NOS Dupont paint mix numbers. They are cleared with Nitrocellulose Lacquer.

I have photographed my sample blocks in a way that attempts to show the dynamics of a given color rather than just a flat thumbnail image. I feel this better represents the color. I am still working at making the colors more accurate. Keep in mind that I am doing this and testing it on a few dozen different computers and they are rather consistent, but the color may very depending on your display and video card.

“The Black Strat” is the first and only accurate and knowledgeable account of David Gilmour’s favourite Stratocaster guitar. Written by Phil Taylor – David’s personal guitar technician since 1974 – to coincide with the release of the long awaited and much requested Fender ‘David Gilmour Signature Strat’: an instrument replicating the look, set-up, sound and feel of David’s famous guitar as it is today. The chronological story begins with David Gilmour joining Pink Floyd early in 1968, his guitar at that time, his subsequent instruments leading to the purchase of the Black Strat in 1970, and the other guitars that have come and gone. This book details all of the changes and modifications made to the Black Strat, its use on Pink Floyd tours and iconic albums, David’s solo projects, and various guest appearances throughout the years.Â

Phil Taylor (London) has been working for Pink Floyd continuously since he was 22 years of age. In 1974 he was employed by Pink Floyd to take care of the band’s personal equipment used on stage and in the studio. He has worked on every Pink Floyd and David Gilmour project for over three decades.

This book is a great gift or alternative for those of us who can’t afford the two and a half grand for the new Fender Â signature replica!

Take a closer look at the book in the link..