Jim Root is one of the guitarists for masked Iowa metal nine-piece Slipknot. Slipknot have released four albums since their formation in 1995. 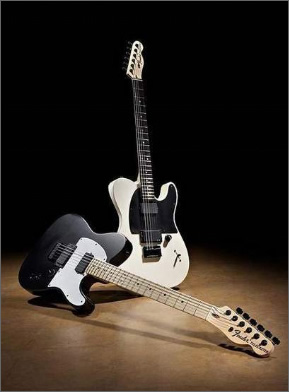 All members of the band are numbered, from #0 to #8, and all wear intimidating masks to conceal their identities. The guitars are heavily down-tuned (Root and fellow guitarist Mick Thomson often tune to drop B or lower), and heavy use of pinched harmonics and shredding solos is common within the bandâ€™s music.

All of this makes it seem more unusual that Rootâ€™s choice of guitar is Fenderâ€™s ultra-traditional, 60-year-old Telecaster design. Root himself was surprised by how well he got on with the Telecaster, quoting in a 2009 interview with Guitarist magazine

â€œItâ€™s very odd that someone who does what I do plays a Teleâ€¦it honestly wasnâ€™t a guitar Iâ€™d normally have been drawn to. Iâ€™m a Strat guy, but I got sent a Flathead Tele a few years back and I ended up playing it so much it just got comfortable.â€

This led to Root making a new signature guitar with Fender, based on the Telecaster, in 2008. The only feature remaining from the original design is the shape.

The body is mahogany rather than the more traditional ash, the single-coil pickups are swapped for active EMG 81 and 60 pickups, the â€œashtrayâ€ style bridge of the original has been replaced by a Strat-type hardtail bridge and the guitar is coated in a satin white or black finish with a contrasting scratchplate.

Other tweaks made include an extra fret (bringing the total up to 22), locking tuners and a simplified control layout (just the one volume knob).

Here are the specifications: