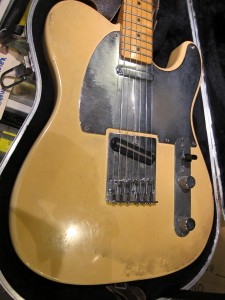 My friend Nicolai over at Vintage and Rare has alerted me to the sale of one of Jeff Buckley’s most used guitars through Chelsea Guitars, one of the dealers who advertise through his website.

The 1983 Telecaster was used extensively for live work by Jeff and was given to a close female friend by his family after Jeff’s untimely death in 1997.

I am not sure on all the details of the guitar, (it obviously has a replacement pickup) but Chelsea or Vintage and Rare will be able to supply all information needed. The guitar comes with all the provenance needed to prove its importance and legitimacy.

Here’s the link to the full details; Jeff Buckley’s 1983 Telecaster for sale

Here’s a nice video by my buddy Nicolai from Vintage and Rare.

This is probably the largest collection of brown 1970’s Fender guitars in the world, including a tasty brown Starcaster in the back row..not a colour I have ever seen before on the Starcaster, which is rare in any colour!

The collection is for sale, but only as a collection..Bob won’t split out individual pieces.

Here is a great story I unearthed the other day. It just goes to show that there are still some fantastic guitars out there, still waiting to be found!

This is the story of my father, who was a pack rat, his 50-year-old guitar, which sat neglected in our basement for years, and the extraordinary Hanukkah surprise our family received this year.

Much to my mom’s chagrin, my dad never threw out anything. Even old things would find a new use one day, dad used to say.

He not only kept things that were obviously meaningful–such as his old grammar school notebooks or his collection of corny, handwritten jokes he kept just in case he needed a groaner for a party.

He also saved stuff that no one else would think of keeping–like the hang tag for the 1956 Fender Esquire he bought in Saskatchewan not long after my parents immigrated to Canada.

Fate delivered a cruel blow about three decades ago when dad was diagnosed with Parkinson’s disease. The tremors first began in his right hand–his scalpel hand–and my father had to give up surgery.

Soon it became too difficult for him to play the guitar and the Fender was tucked into its bag and stashed away.

About a decade ago, my brother-in-law expressed interest in learning how to play the guitar so my father gave him the Fender. But just like I never used that sewing machine I bought on a whim many years ago, my brother-in- law never got around to taking guitar lessons.

So the lonely Fender sat untouched in their basement for years.

A couple of years ago, after my father died, my brother told some of his guitar-playing friends about the Fender. After seeing photos of it, they concluded: “Dude, this is a serious guitar!”

They sat my brother down in front of the computer, showed him some vintage guitar sites and it slowly dawned on my brother that my dad’s old guitar might be quite valuable.

Still, procrastination set in and my brother didn’t actually take the guitar in to be appraised until a couple of weeks ago.

As my brother tells it, the vintage guitar specialist “opened up the case, looked at it quietly for about 30 seconds and his eyes lit up.”

That specialist, Chris Bennett, of the Twelfth Fret in Toronto, spent about 45 minutes examining the guitar. He took it apart to check out the markings and electronics, then put it back together and played it briefly.

“Other employees kept coming over to see what he was up to and they universally had the same reaction: ‘Holy (bleep)!’ ” recalls my brother. “There was a buzz in the store.”

My father probably paid about $180 for the Fender when he bought it in 1957, says Bennett. The Esquire, introduced in 1950, and played by musicians such as Jeff Beck when he was with the Yardbirds, was a big seller.

In fact, Fender now has a custom shop that recreates those pieces for about $3,000, says Bennett.

“It’s a way of connecting with the past and getting one of those guitars without paying $15,000 and up for them,” he explains.

“It’s a lovely guitar. It definitely made my day,” he says of my dad’s Fender. He appraised it at $25,000 US because it’s in great shape, hasn’t been altered and it’s got the original hang tag and carrying bag.

“My eyes bugged out,” says my astonished brother. “I was gobsmacked,” adds my mom.

Perhaps my Irish father always knew he’d immigrate to western Canada. Long before he ever bought the Fender, he was strumming songs such asRed River Valley, Home on the RangeandRidin’ Down the Sunset Trailon earlier guitars.

“(The guitar) was just occupying space as far as I was concerned,” says my mom. “I’ve decided that I probably won’t throw anything away.” 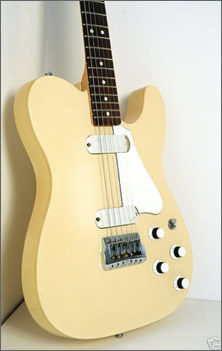