If you heard the words â€œguitarâ€ and â€œenvironmentâ€ in the same sentence in the last few months you were probably hearing about the raid on Gibson Guitar. While the August raid on Gibsonâ€™s factories continues to draw a lot of attention and still gets conservatives and Tea Party supporters angry, another guitar company is coming up this week with an innovative effort to connect the dots between guitars and the environment in a positive way. 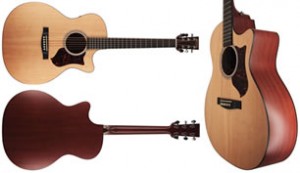 On Tuesday, C.F. Martin announced that it will utilize FSC-certified recycled Sitka spruce in one of its new cutaway guitars in the companyâ€™s Performing Artist series â€“ the GPCPA4 Sapele. Now, here comes the good part â€“ the wood, which will be used on the tops of the new guitar, is coming from none other than dismantled Canadian bridges where it had been used in construction.

â€œMartin Guitar has long been committed to research and innovation to find alternatives to rare woods,â€ explained Chris Martin, the companyâ€™s chairman and CEO. â€œThe use of this recycled traditional tonewood will complement the Sapele wood that this guitar utilizes, allowing us to achieve the same structural integrity and traditional Martin sound,â€ he added.

The search for such innovative solutions is not accidental, especially for a guitar maker with sustainability in mind like C.F. Martin. â€œIn order for a musical instrument manufacturing company to become more sustainable, they have to look at the primary resources from the planet that theyâ€™re using and get those resources in the most environmentally sustainable way,â€ explains Scott Paul, director of the forest campaign for Greenpeace.