Les Paul, whose pioneering electric guitars were used by a legion of rock stars, has died at the age of 94. 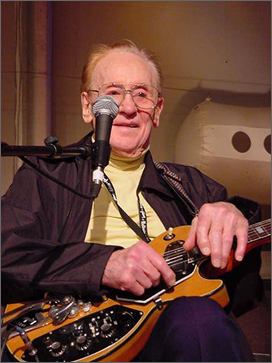 Mr Paul died from complications of pneumonia in New York, according to Gibson, the firm that sold his guitars.

He is credited with inventing the solid-body electric guitar, which went on sale in 1952 and contributed to the birth of rock ‘n’ roll.

He also developed other influential recording innovations such as multi-track recording and overdubbingÂ and he was credited with inventing the eight-track tape recorder.

Henry Juszkiewicz, chairman of Gibson Guitar, said: “His influence extends around the globe and across every boundary.”

Gibson president Dave Berryman said: “As the ‘father of the electric guitar’, he was not only one of the world’s greatest innovators but a legend who created, inspired and contributed to the success of musicians around the world.”

Like you probably know, Lester William Polfuss is dead today, so I created a post to do a tribute of this fabulous guitarist and inventor, puting Gibson fans favorite LP models following this post: http://minurl.fr/uw2

If you want to participate to this tribute, just send me an e-mail with your name (or pseudo), favorite Les Paul model (or your LP if you have one and you love it), and website address (for a backlink).

To raise the movement, you can send the message around you if you want (on your blog or other social networks for example).

It is very important for me, so thank you very much.

I recently came across your blog and have been reading along. I thought I would leave my first comment. I don’t know what to say except that I have enjoyed reading. Nice blog. I will keep visiting this blog very often.