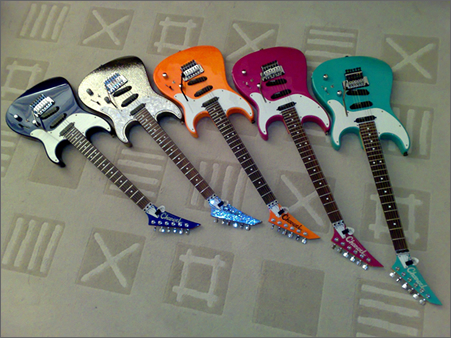 Man I had one of these for years. It was the desert crackle finish. I parted with it a few years ago in a thinning of the heard moment. I do miss it. It was a really well made guitar.

This article brought all the good memories back. Thanks.

I have a Spectrum in Seafoam green and it is in VERY GOOD condition. I am the original owner and have only played it a handful of times. It is currently going through a restring and full tuneup at the local shop and then unfortunately, I will be posting it on ebay. I wish I didn’t have to sell it. Even though I don’t play anymore it will be VERY hard to part with it. This was one of my absolute favorite guitars!

I loved these when they came out, and last year got myself a seafoam green one from eBay. It’s in almost perfect condition, and it almost plays itself, I love it!

Only complaint is that the pickups are a little on the weak side, so there’ll be a booster circuit or replacement pickups going in soon I reckon…

I have a Electric guitar named Charvel.

the price,specs, and other special characteristics

send us some pics then Jonny Boy!

would like to share this with those who are interested.I happened across one of these charvel spectrums at a pawn shop on the clearance rack.tried it out and was not operational at all, actually looked at it 3 seperate times and dates,black with white pickguard.Was actually looking for parts and spent previous week in web research on pickups so when I saw this one it occured to me maybe this one a little different with the small toggle switch so took the chance and bought it for……………..150. dollars………….yep. and guess what,,the battery was dead.for those who care…this is one mother of an axe,never played one quite like this absolutely stunning,mine however has double coil at bridge position and rocks the house,don’t believe I will part with this now that I am hooked so don’t bother to try.can send pictures if you like

I’ve just bid one on e-bay yesterday, well at least from the pictures it looked to be in a very good condition, the seller claims that he bought it for his wife some 20 years ago and she quickly lost interest, the instrument has been barely played thus in a very good condition. I’ll probably receive it before next week-end, can’t wait. The reason why I bought this instrument is because I own a Charvel from the same period of time and same japanese manufacturer, the Classic series 375-Deluxe. Thus I appreciate very much the craftsmanship behind these extremely well build instruments, I’ve bought it new 20 years ago and still looks close to new for a guitar that’s 20 years old. For those who live in UK and intersted in collecting guitars, have also a look on the german e-bay, there are some interesting guitars to bid on. Oh by the way, the one I’ve bid on was the orange coloured Spectrum model.

I have a candy blue, maple neck, it was in pretty “bad” condition (ebay) but got it cleaned and fixed some stuff. I havenÂ´t played it a lot but I canÂ´t decide to sell it given that everybody says it is great (which I also think) and secondly, I paid 125 dollars, i.e. less than 100 euros, which is a bargain (on top of that I had to add shipping and repairing expenses. its previous owner probably did not know what an electric guitar is, or what is it for!! 🙂
thanks

Does anyone know if Jeff Beck ever even played this guitar. I can’t find one picture of him with it?

No he didn’t, he played a similiar model which was then used as the basis for the Spectrum, as my friend Rockbeare says;

The Charvel Spectrum follows on from the rare Charvel Model 8, which looks identical except for the earlier US Charvel headstock logo (see second last pic), whereas Spectrums all have the â€˜toothpasteâ€™ logo. Jeff beck played a custom Jackson around the time of which acted as the prototype for the Model 8 and subsequently the Spectrum (the last pic shows him with it on the cover of a contemporary magazine. The video for â€˜Ambitiousâ€™ featuring the Model 8 is at http://www.youtube.com/watch?v=zbpQf22c494).

Hi, for anyone that is interested. I have an Orange Charvel Spectrum listed on eBay UK right now, plenty of pics and could be one of your only chances to get hold of this beauty (check for username daverodders, but to be honest if you search for Charvel Spectrum you will only find my listing).
Cheers

Have a look at my Charvels click the links:

All of them build between 1989 and 1991. Designed by Itaru Kanno today designing and building guitars for Caparison.

Just about to list one in Sea foam green, with a maple neck in very good condition. Comes with the 1990-91 JHS retail catalogue which it is in. I also made enquiries when I first purchased it, for any available info on the Spectrum from the UK distributor. She sent me photo copies of various catalogues and more importantly the circuit diagram.

Check out Ebay uk, seller name ‘julesulika’
A chance to own this gem of a guitar. Good luck!

How much are you asking for it?

I have a desert crackle in mint condition, never play it, jus collecting. looking for an origional Kramer Beretta 85 or 86 all matching parts and numbers, and in perfect shape. May consider trade. Real Beretta! no reissues by musicyo or knockoffs please.

I have a 1989 charvel flouro. The black wire from the pickup in the guts came disattached somehow. I have no idea where it is supposed to attach. if anyone can take a picture showing me where it attaches, I will be greatly appreciative.