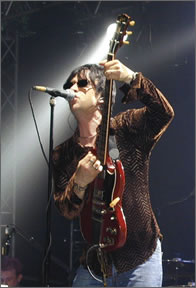 Former Smiths guitarist Johnny Marr is â€œecstaticâ€ after one of his favourite guitars was returned to him – 10 years after it was stolen.

Marrâ€™s treasured vintage 1964 Gibson SG vanished after a show with his band Johnny Marr and the Healers in London in 2000.

The musician was so upset by the theft, he offered a reward for information leading to the return of the guitar, which has an estimated value of Â£30,000.

Now he has finally been reunited with the instrument – after a guilt-ridden fan confessed to the theft.

Stephen White admitted stealing the guitar on the â€œspur of the momentâ€ after he was invited backstage following the gig. He took it home by taxi and has kept it in his living room ever since – but was arrested earlier this year after cops received a tip-off.

Police Constable Christopher Swain said Marr is â€œecstaticâ€, adding: â€œHe bears no malice towards the defendantâ€¦ The guitar did have a high sentimental value to him.â€

A spokesman for Marr says, â€œHe is obviously very happy to have his guitar returned.â€