The Fender Lead series electric guitars were manufactured from 1979-1982.

They was produced in Fullerton, California factory under the direction of Greg Wilson and John Page. 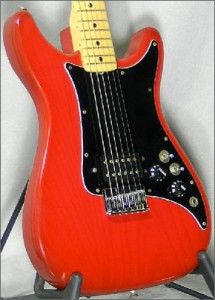 They resemble Fender Stratocasters in appearance, but have a unique set of features. Steve Morse was one endorsee of the Fender Lead, and the whole series were probably designed to cash in the fashion for single pickup, Van Halen style superstrats Â in the late ’70s and early ’80s

In 1979, Fender introduced the Lead I. The Lead I had a only one pickup, a humbucker in the bridge position. The Fender Lead series models all had the 25 1/2 inch scale length Â of a Fender Stratocaster and Â all Lead models were available with either maple or rosewood fretboards.

The Fender Lead I controls are unique. There is a 3 position pickup selector switch (Neck pickup, Neck & Bridge parallel mix, Bridge pickup) a phase switch, a master volume control, master tone control. The volume and tone potentimoters are 250k and the tone capacitor is 0.05 uf ceramic.

Today a Fender Lead I in excellent condition sells for up to $1000.

The Lead II was also introduced in 1979.

It featured Two specially designed X-1 single coil pickups. The X-1 pickups were promoted as â€œwide range single coilsâ€ and are slightly hotter than a standard Strat of that era.

Both the Lead I and Lead II were normally finished in either black, wine red or brown.

Today a Fender Lead II in excellent condition sells for around the same price as the Lead 1.

The Lead III was manufactured in 1982 only. It had 2 humbuckers.

All of these guitars are becoming collectable now, as they are American made Fenders Â and the youngest are at least 25 years old, which gives them an intrinsic value. They are quite rare, but still affordable, so it it worth tracking them down and snapping them up when available.