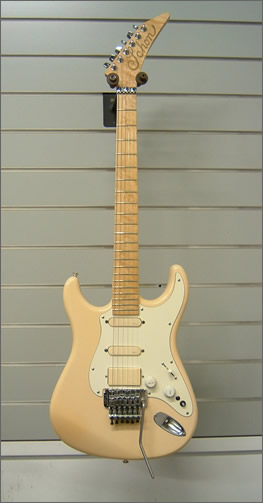 It isn’t very well known that Journey guitarist Neal Schon had a “blink and you missed it” guitar company in the 1980’s. The most famous model is a single cutaway that was seen in the later Journey and Bad English era.

Those models were made by the Jackson guitar company in 1986 and it’s estimated that about 200 were made. When disagreements between Schon and Jackson caused him to move on, Neal turned to Canadian guitar maker Larrivee.

We’ll be writing up the more common Schon guitars in another post, but in the meantime, here is an interesting article on Schon guitars from guitar luthier Phil Clark in Arizona;

Thanks for spreading the word! You’ve got a great site and I look forward to reading your article on Schon guitars. Phil

I had never seen the Schon model guitar you worked on, so your article was an interesting find.

Is this still active??