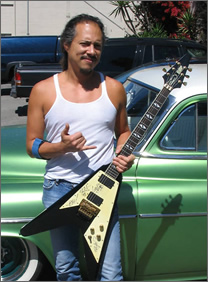 Seller Neals Vintage Guitars is offering up the instrument on eBay.com for the fixed price.

A statement from the seller reveals, “Kirk played this guitar in concert quite a bit! Just after that, he gave me a backstage pass for a show at Irvine Meadows in Orange County, California on the Load tour, I went backstage and had everyone in Metallica sign the guitar, I also had them sign the Load CD. I then had the pickguard sprayed with a clear coat to protect the signatures.

“Then, in 2007, I was lucky enough to go the studio where Metallica was recording their most recent album, Death Magnetic.

At that time I had Kirk sign the back of the headstock and sign the letter of authenticity. I am including a photo of Kirk signing the guitar! This guitar has lots of road wear from Kirk playing it, but it is in good solid condition and plays great!”

Kirk Should sale the Karloff Mummy That Is A Cool Guitar