We made a trip to the London Guitar show last weekend, or to give it its proper title, the London International Music Fair 09, held at the Excel Centre in East London.

I have to say it was a disappointment.

There were noticably fewer guitar manufacturers on display; no Fender, Gibson, or Dean and very few bass companies either, compared to last year. 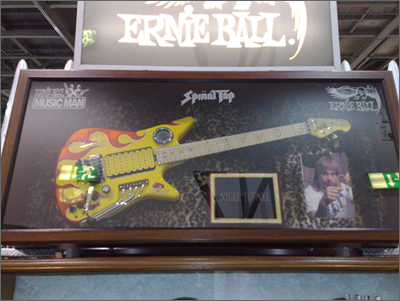 Acoustic makers were well represented, with quite a few small manufacturers taking stands, and a few companies selling accessories and peripherals.

Apart from a few other notable amp and guitar companies such as Orange, Marshall (with Jim Marshall signing autographs!) Yamaha, PRS and Vintage/Fret King/JHS the rest of the show seemed to be full of PA gear and MIDI stuff.

I assume the credit crunch had an effect on the number of companies able to commit to taking stand space this year, and also there appeared to be less people milling about too.

I guess people don’t have the same levels of disposable income they used to, or if they do, they are being more reticent about parting with it.

Overall it felt disappointing, although I’m sure we’ll be there complaining again next year! 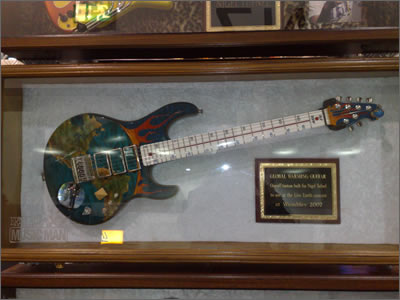 Now that top guitar looks groovy. Looks like a hippy guitar. I bet it is worth a dime or two.