The Ovation company is best known for its acoustic guitars, although they had a very good crack at the solid electric market in the early 1970s (1972 to be precise) with the UKII, the Preacher, the Viper, and the subjects of this article, the Deacon and Breadwinner. 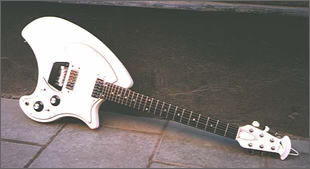 While the former three were fairly normal in design, albeit with traditional Ovation touches in the shapes, the Deacon and Breadwinner seemed almost mutated in comparison, with their bodies shaped somewhat like axes. They also had active mini-humbuckers, rare in the 1970s.

The difference between the Deacon and Breadwinner was not immediately obvious to the casual viewer.

The Breadwinner was the more basic of the two, with dot inlays, no binding on the fingerboard and a larger scratchplate. The Deacon had diamond inlays, binding, a smaller scratchplate, and was only available in natural finishes.

The Breadwinner and Deacon were often seen in the hands of Â Jeff Lynne of the Electric Light Orchestra, Steve Marriott and occasionally Ace Frehley of KISS.

On a recent trip to Denmark Street I found a white Breadwinner for sale for around Â£800.

They are rare and quite collectable even though sales never took off originally.

They are fantastic guitars, sound great, and are beautifully ergonomic. They were well ahead of their time.

http://guitarz.blogspot.com/2008/05/breadwinner-re-issue-is-sadly-not-to-be.html – scroll down on this link to see a pic of my Breadwinner (the black one).

Thanks for the extra info, I’ve added you to our bog roll.

[…] my post about the Ovation Breadwinner guitar, I found a couple for sale in London last […]

As far as I can remember the Breadwinner was a passive guitar and the Deacon had active electronics to add variety to the tone. I would love to own one.

I have what appears to be a mid 70’s Breadwinner, tho I thought for years it was a Deacon. It came with a textured God awful tan speckled finish and dot inlaid neck. I see on various sites that the Deacon came with diamond inlay and natural finishes. I see something different tho, on most of the pictures the jack is in the front… mine is in the END of the body, with the mounting plate curved to fit. Was this a change that may help identify the year? This guitar has the sweetest action I’ve ever felt and no buzzing…
Anyone familiar with this jack configuration?

Hi Pat, how about posting some pics of it on the Guitar collecting Facebook group page?

flyssy,
I’ll give it a go, tho not sure how. Don’t have a facebook account. I’ll take some phots and give it a try. be interested in other opinions on this guitar, thanks.
Pat

flyssy, I posted some photos to your Facebook. Enjoy. I looked at the comment above by John Bauers. My Breadwinner is run by two 9 volt batteries… not very passive. Didn’t all of them run with active circuitry?
Pat Mc

I bought a Deacon from a Pawn Shop when I was 15 (1985) for about $50. The idiot that I was I switched out the preamp and single coil pick-ups for a PJ Marx humbucker. Still have the guitar though. I love the action and I’m thinking about a new pick-up to try and at least restoer some of the original sound.