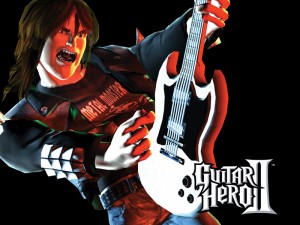 Check out the new Art Guitars. There awesome! Real wood customized guitars compatible with the PS1 and 2 and Guitar Hero. http://yovia.com/blogs/artguitar/2009/11/24/cool-art-guitars/

Yeah, I suck at guitar hero as well. I don’t even enjoy playing the game, but still they can give people a good sense of timing and rhythm and get them on their way with the real deal. Nothing wrong with it – and I know plenty of students who got started this way.