Very sad to hear of the death of Gary Moore earlier today.

He had such a great tone and feel, “Still got the blues” is one of my all time solos. Here is another great track of his as a little tribute.

This guitar is considered to be the Holy Grail to many guitar enthusiasts, collectors and musicians. Sunburst Les Pauls were and are played by the most iconic rock stars of any era.

Billy Gibbons, Jimmy Page, Joe Perry, Duane Allman, Ace Frehley, Jeff Beck, Paul Kossoff, Joe Walsh, Gary Richrath, Steve Lukather, Gary Moore, James Hetfield, Michael Bloomfield, Peter Green, Gary Rossington, Ed King, Slash, Edward Van Halen, Eric Clapton, Rick Nielsen and many many others. This is a once in a lifetime opportunity to own a vintage Les Paul that has a history that is traceable back to the 1960’s AND was owned by Gary Moore. 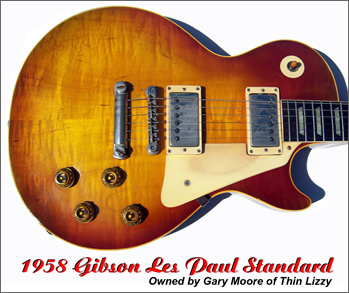 This guitar is in spectacular condition and has made appearances in numerous magazines and books. The color is fantastic and the top has a very pleasant mild flame. Guitar plays and sounds fabulous. I personally dealt with Gary Moore’s management and tech to acquire this guitar for a collector in 1994 and the experience of working with Mr. Moore’s staff was a great pleasure.

History This Les Paul was used for Gary Moore’s “After Hours” CD photo shoots. It was used for Gary’s 8×10 B&W glossy photos. It was used in two Gary Moore videos: “Cold Day in Hell.” and Since I Met You Baby.” This guitar has been featured in NUMEROUS books and magazines. (ie: “The Electric Guitar, an illustrated history.” Pages 93 and 147.)

Notable Provenance circa 1965-1990 owned by a guitarist who is also a vintage guitar dealer. 1990-1991 owned by English author Richard Chapman. 1991-1994 owned by guitarist Gary Moore of Thin Lizzy. Condition Guitar is in exceptional condition with exception to the following issues.

In a downer moment that must have left countless concert-goers blinking, shaking their heads, and bellowing, “drag, man!” Guitarist Ronnie MontroseÂ actually stopped a show in mid-song, had the house lights turned on, and scoured the theater when his 1959 Gibson Les Paul Standard was stolen right off the stage. 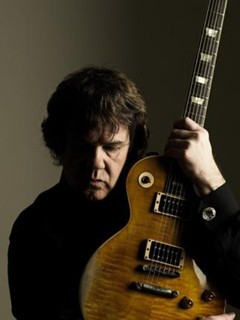 Montrose, a San Franciscan, hasn’t seen his guitar (which he bought from J. Geils) since that night on Oct. 10, 1972 when he played Dudley, Mass. with the Edgar Winter Band … until now. The San Francisco musician — who has played with Herbie Hancock, Van Morrison and others — claims that after 37 years of scouring and thousands of dollars spent on private detectives, his guitar has turned up in the possession of British musician and guitar collector Gary Moore — and, last week,Â Â Montrose filed suit in San Francisco District Court.

Gibson Les Paul models of this vintage are crafted of mahogany; only around 1,700 or so were ever made and no two guitars look exactly alike. Montrose claims he can identify his old axe from pictures of Moore’s collection — but, more exactingly, he says the serial number of the guitar is the same as the one taken from him in Dudley. Â Â

Reached at his home in Brighton, England, Moore refused to discuss the matter, saying only that the â€œwhole thing is a shamâ€ and â€œIâ€™ve had that guitar for more than 20 years.â€ Montrose doesnâ€™t dispute that notion, but he insists that doesnâ€™t change the fact that Moore is in possession of his stolen guitar and must return it. An angry Moore refused to comment further on his tussle with Montrose over the decades-old instrument.

The legal ramifications of the case are complex, and Montrose hopes to get a judge to weigh in on several issues, including the statute of limitations on a 37-year-old case and an instance in which the current owner of a piece of stolen property is not alleged to have stolen it. Another major issue is jurisdictional, as the theft is alleged to have occurred in Massachusetts, its current owner lives in England and Montrose lives in San Francisco.

Ed Roman, owner of Ed Roman Guitars in Las Vegas, has served as an expert witness in stolen guitar cases for the estate of late guitar great Jimi Hendrix. He said Montrose faces an uphill battle, primarily because the alleged theft occurred so long ago.

Roman said the Hendrix estate and Paul McCartney have been unable to retrieve stolen guitars in cases where they knew who had them but were unable to overcome the years gone by.Â “If it is more than 10 years ago, the person who has it usually keeps it,” he said. “I doubt Ronnie is going to be able to get it back.”

Guitar thefts have long been common in the music business. R.E.M.’s Peter Buck had his prized Rickenbacker guitar stolen in September in Helsinki, Finland, only to have it returned anonymously two weeks later at a show in Luxembourg. Slash of Guns N’ Roses fame had his Gibson Les Paul Goldtop guitar stolen from his studio in 1998, and Gibson eventually made a new one for its longtime star client.

Montrose’s hunt for his guitar has been rife with false leads, missed opportunities and dead ends.Â In January 1977, someone contacted one of Montrose’s bandmates about the guitar’s whereabouts, only to disappear when Montrose hired a private investigator to look into it.

The hunt regained steam in the early 2000s when Indelicato was given a photo of a 1959 Gibson Les Paul by another guitar dealer at a Texas guitar show and told that Montrose’s instrument was in the hands of an English guitar player. The photo showed the guitar’s serial number, and Indelicato claims that an Internet search for the serial number sent him to a forum thread on the Gibson Web site that connected Moore and the serial number for Montrose’s missing guitar.

But it was the November 2007 issue of the British magazine Guitar Buyer that ignited the standoff between Montrose and Moore, who once played for Thin Lizzy as well as being a well respected solo artist.

The publication featured a multi-page spread on Moore and his guitar collection, including several photos of a 1959 Gibson Les Paul Standard. The Sunburst guitar is known for its distinctive maple wood face with unique wood grain patterns. Montrose claims a photo showing a pin-sized hole in the back of the guitar is the proof, as he drills such holes in all of his guitars.

The Guitar Buyer photos showed that the guitar had sustained significant wear and tear over the past 37 years, a sign that Montrose’s complaint claims “substantiates a risk of future damage so as long as the ’59 Gibson remains in Mr. Moore’s possession.”

An angry Moore refused to comment further on his tussle with Montrose over the decades-old instrument. But his quote in the Guitar Buyer story shed light on its value to both men.

When asked if he still played the ’59 Gibson on the road, he replied, “Sometimes, but don’t tell anyone that. I don’t really like taking it out too much because it’s getting a bit scary now. I don’t think I’ll find another Gibson Les Paul to replace it. I’d have to get one of the same vintage, because no matter what new ones I get, they’re never going to be like that.”