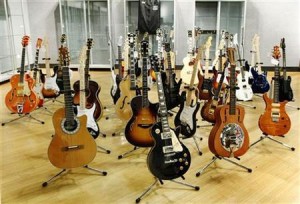 Eric Clapton is to sell off part of his extensive guitar collection to raise money for his rehab clinic.

Highlights of the sale will include a guitar the musician played at the Cream reunion shows in 2005, estimated to sell for more than Â£13,000.

More than 150 lots will be auctioned in the New York sale next year.

Money raised will go towards the Crossroads Centre in Antigua, which Clapton founded in 1998 to help treat drug and alcohol addiction.

The sale will also feature a vast collection of amps and speakers, including a pair of Marshall speaker cabinets.

Used during the 1970s when the star was performing with Derek And The Dominos, it is expected to fetch more than Â£5,000.

Guitars donated by Jeff Beck, JJ Cale and Joe Bonamassa will also go under the hammer.

“We are delighted to be offering such a fantastic collection of guitars and amps from such an iconic musician,” said Stephanie Connell, head of entertainment memorabilia at Bonhams

She said she hoped the auction would “raise a lot of money for this worthwhile cause.”

Items will go on display at Bonhams in London from 23 to 26 January before the sale on 9 February.

Guitar Center will take its iconic “Legends Collection” on the road beginning May 23 for a 4-city tour that will make weekend stops in Fountain Valley, La Mesa, San Francisco and Hollywood. 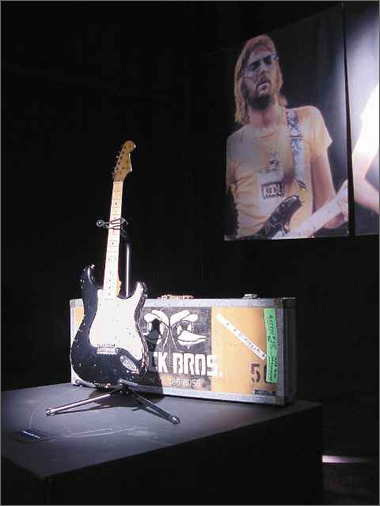 The “Legends Collection” will feature three of rock’s most famous guitars – Eric Clapton’s “Blackie” Fender Stratocaster and Gibson ES-335, as well as Stevie Ray Vaughan’s “Lenny” Fender Stratocaster. Purchased for over $2.4 million from the Clapton Crossroads Centre charity auction at Christies New York in 2004, these three guitars are among the most treasured guitars in rock history.

Assembled in 1973 by Eric Clapton himself from the parts of several guitars, Clapton played “Blackie” almost exclusively on stage and in the studio from 1973-1985, recording hits such as “Cocaine,” “I Shot The Sherriff,” “Wonderful Tonight,” “Further On Up The Road,” “Lay Down Sally” and various live versions of “Layla” as well as being featured on several album covers and videos. His Cherry Red Gibson “ES-335” was used to record Cream’s versions of “Badge” and “Crossroads” as well as many other historical performances during the 40 years he owned it.

Steve Ray Vaughan’s “Lenny,” which Guitar Center purchased for $623,500, was used to record his classic love songs including “Lenny” and “Riviera Paradise.”

Home to the largest collection of vintage instruments in the nation, Guitar Center is also proud to showcase a hand-picked selection of its most rare and sought-after vintage guitars as part of its Vintage Road Show. 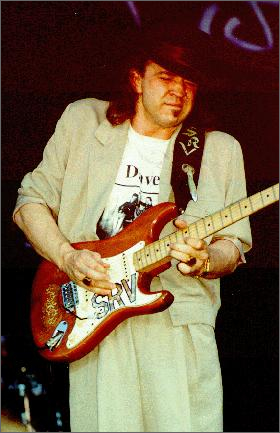 With Vintage locations in Hollywood, Nashville and Manhattan, Guitar Center’s vintage collection includes hundreds of the rarest and most valuable guitars, amplifiers and other instruments, including an impressive assemblage of ’50s and ’60s Strats and Les Pauls, handcrafted archtops, Jazz Basses, P-Basses and more.

Vintage guitar enthusiasts can visit the “Legends Collection” and Vintage Road Show at the following locations: