Highly regarded as one of the worlds greatest acoustic guitar players, Gordon has been at the forefront of acoustic playing since the late 1960’s and has released more than thirty albums in his four decades in the music business.

Designed in conjunction with respected master luthier Rob Armstrong and Gordon himself, this crossover Grand Auditorium/000 style Vintage electro-acousticis based on a hand-crafted instrument that Rob made back in 1980 and Gordon plays today.Featuring a high grade solid North American cedar top, with mahogany back and sides the signature “small waist” body is complemented by Rob Armstrong’s trademark headstock design.

“I have played many great guitars in my years in the business and this one ranks alongside some of the very best,” says Gordon when asked about his new signature model, “it is an outstanding guitar by anybody’s standards and at any price. My original guitar has a very strong treble with a sort of springy and expressive sound to the bass end, the new Vintage guitar has all of this combined with an overall warmth and balance to its tonality.” 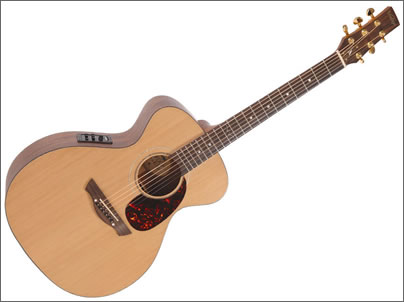 “When Rob Armstrong first set eyes on the first sample all he could say was WOW, and that’s before he even picked it up!” continues Gordon, “I echo his sentiments. I am proud to put my name to this guitar and for it to be a part of my musical legacy.”

Rob Ketch, Fishman’s Vice President-OEM Sales also commented on the collaboration “Gordon Giltrap is a longtime Fishman Artist. Gordon has been using our premium Rare Earth Blend system for a number of years. The Presys Blend system was chosen for the Vintage VE2000GG model to deliver the benefits of pickup and microphone blending with the addition of an onboard chromatic tuner. This combination of features makes Gordon’s Signature guitar the perfect performance instrument for the working musician and enthusiast alike.”

Gordon’s signature guitar is also being made available as a twelve string instrument with the same specification.