Zemaitis is a famous custom guitar company most known for their metal-fronted Les Paul-style guitars. The company was founded by Tony Zemaitis, an Englishman of Lithuanian descent who made his first guitar in around 1957. He started selling the guitars in 1960 to cover the cost of his materials.

The era of Zemaitisâ€™ fame began in the 1970s. In 1970 Zemaitis placed a metal top on a guitar to eliminate pickup noise. The first guitar of this type was sold to Tony McPhee, and many more followed. This is still Zemaitisâ€™ most recognized design, and an icon of electric guitar design. The second ever metal-topped guitar was sold to Ronnie Wood of Rolling Stones fame (he was then in The Faces).

The majority of the guitars are a mahogany-bodied Les Paul shape, although with a steel top and narrower waist. The steel tops are sometimes engraved (renowned engraving artist Danny Oâ€™Brien did the originals and still works at the company) with patterns such as dragons and mosaic inlays. Some also have engraved and inlaid pearl fronts.

Zemaitis are also well known for their classic acoustic guitar design, a standard dreadnought-style acoustic with a heart-shaped soundhole and sometimes a much exaggerated thin-waisted shape. This has often been paired with a sun-shaped decoration around the soundhole or a bridge which curves upwards to resemble a smile. 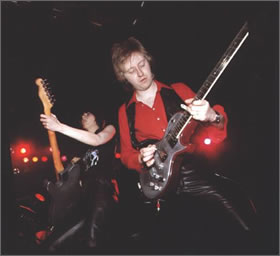 Tony Zemaitis died in 2002, but his son Tony Zemaitis Jr. still runs and owns the company, which has since relocated to Japan. Zemaitis still produce a huge variety of guitars, from the (relatively) affordable Japanese GZ series to the handmade custom jobs. The company also produces acoustics and basses.

James Hetfield of Metallica has recently been seen on the bandâ€™s World Magnetic tour playing a steel-top Flying V shaped Zemaitis. These models are manufactured by Greco in Japan along with many others, including the original metal-fronted guitars and some with Bigsby vibratos and single coil pickups. Custom built guitars are also available from the company.

There is also a bass, a Les Paul shape with Precision and Jazz-style pickups and 24 frets. This has been used extensively by Micky Waters of The Answer, and can be seen in many of the bandâ€™s music videos. 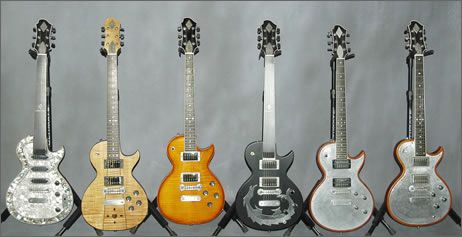 The GZ series, while more affordable than the other ranges, is still far from cheap, with most models over Â£2000. Custom built models are likely to be substantially more.