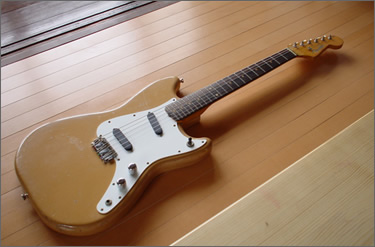 “troublesome tremolo bridge of the Mustang”

The only trouble mine ever gave me was that the screw that holds the arm in fell out at some point years ago–and I was unaware of it.

Other than that, no trouble–I love the vibrato on the Mustang (And it does say “vibrato” on it–which is what it really is.)

It’s a nice subtle vibrato that is easy to use–with the bar or with the heel of my hand against the tailpiece. The bridge moves with it and helps keep it in tune. I think it is an ingenious design. I am a fan of it.

Troublesome? Not at all.