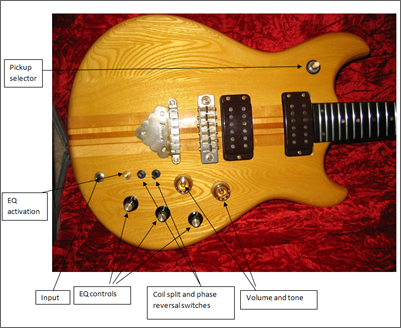 That’s a BEAUTIFUL guitar and a terrific article. Many Thanks!

thanks for the kind words!

Some MC500s had two regular knobs and the later ones had 3 (in addition to the 3 black EQ knobs. The two knob versions (like the MC500NT used to explain the control layout) consisted of a master volume and a pre-amp volume – that’s NOT a tone knob. The versions with 3 knobs (like the MC-500WN at the beginning of this article) were Master Volume, Master tone, and pre-amp volume.

Thanks for the extra info Meezil..

Don’t forget the MC400 series! It has all the same controls and neck-through construction of the MC500, but with a mahogany core and a flat top. Thanks for a great article on one of the best-kept secrets of the guitar-collecting world.

Hi – I’m looking for someone with a musician for sale – any leads?

This is for Shaun. I only found this site today because I am thinking of selling my Musician and wanted advice on what it might be worth. I noticed your queston, if you haven’t found one yet let me know and maybe we could help each other out.
Regards,
Tony.

I have a black 78 musician like this for sale. make an offer to david at david@3zeros.com

Flyssy or anyone that can help,
I own an Ibanez Musician that I believe to be from the 70’s Serial #D785679
Unlike the MC500 it only has 4 control knobs and one 3 way switch, laminated blond neck through body construction, & Solid Mahogany Body with covered humbucker pickups.
Question: Where can I find out more information on this guitar, & get an estimate of it’s true value?
Dirk

Hi Dirk, I’d suggest you ask the guys over at the Ibanez collectors forum, they really know their stuff!

Guess I must have been one of the unlucky ones. I bought an Ibanez Musician back in 1977 and by 1978 the neck was so warped it was unplayable. In fact, I was so disappointed in it that I’ve never bought another Ibanez in over 30 years.

Hi I have an Ibanez musician 1975 in perfect condition im considering selling, would anyone be interested? If so email daniel.croll@btinternet.com

I have a 1977 Ibanez Musician MC100 in very good condition that I have owned since 1979.It has never been gigged or even taken out of the house for that matter. I hardly play it anymore,and am considering selling it.If anyone could tell me what it ‘s worth I would like to know.

I have a MC 550 WN for sale. info@stage-band-online.de

Alas, I was the proud owner of a Musician in the late ’80s thru early ’90s, but the wolf was at the door and it had to go. I bought it used in Calgary for $309 CAD. If I had known I was in possession of such a collectible at the time, I’m sure I’d have arranged things differently. Hindsight is always so brilliantly clear.

I have a 1978 model, (all original)but the electronics on mine are set up just like a Les Paul.(no switches)When I first started looking around trying to get info on them I would find them butchered up on ebay with people trying to fit dimarzio humbuckers in them. Calling them project guitars.and of course the people that rip them apart so they can sell them by the piece. At that time I was seeing prices from 699 to 900 dollars. but hardly could find one completely original. I wouldnt sell mine for 3 times that.

I have an Ibanez Musician MC-550WN in Mint condition. I have purchased the guitar in the early 80’s and have held this guitar until today. I am now trying to sell this guitar to the highest bidder. I live in North West of London, United Kingdom. If interested, please contact me by email to ken_morjaria@yahoo.co.uk and provide your contact details.

I have one to sell…

I am interested in your Ibanez Musician. If it is still available please conact me at Rob5sl@aol.com Thanks