Gibson’s Moderne is back in production. Here’s the story in the company’s own words…

A musical chimera, shrouded in the silvered mists of myth and legend, the Gibson Moderne has long been known as the enigmatic “guitar that never was”… or, was it? Designed as the third member of a trio of guitars in the new Modernist Series, prototypes of which were displayed at the 1957 NAMM show, the Moderne was originally intended to be the sibling of the Flying V and the Explorer, but never made it off the launch pad the way the other two then-futuristic classics did. Although they are iconic symbols of rock guitar today, even the Flying V and Explorer were too far ahead of their time in the late ’50s, and fewer than 200 units of both types were made in their original three-year run before deletion from the catalog in 1960. Perhaps Gibson foresaw that a third Modernist was pushing it just too far? Or did a poor early reaction to the guitar lead to its demise? Ted McCarty, president of Gibson at the time, has said a number of Modernes were made; other tales tell of prototypes and raw bodies being burned in a bonfire at Kalamazoo after early showings failed to set the guitar world alight. Whatever the real story–and perhaps it is lost forever to the mists of time–the Moderne is perhaps rarest and most elusive Gibson guitar ever created. Or was, until now. “New” from Gibson USA, the Moderne captures the look, feel and sound of the original, and puts it in the hands of players today.

The Moderne is made to the precise “pre-space-aged-retro” shape that made the original so eye-catchingly hip, with elements of the Flying V’s look, but with an asymmetrical lower bout that makes the guitar much easier to play sitting down. Gibson USA dresses it in your choice of two outstanding finishes, Trans Amber and Ebony, both in genuine nitrocellulose lacquer, with the gold-plated hardware that helped the Modernist series stand out in the late ’50s. The body is crafted from solid mahogany (Grade-A beneath the Trans Amber guitars), with a solid quarter-sawn Grade-A mahogany neck glued in with Gibson’s acclaimed deep-set neck joint. The neck is carved to a slim, fast profile that measures .800″ at the 1st fret and .850″ at the 12th, and topped with a fingerboard made from exotic granadillo. The Moderne’s headstock follows the rare split-top design, as also seen on the extremely scarce Explorer models from the first year of production.

A pair of ’57 Classics captures the sound of the original PAF humbuckers loaded on Modernist Series guitars of the late ’50s. These popular pickups feature Alnico II magnets, vintage enamel-coated wire, nickel-plated pole pieces, nickel slugs, maple spacers and vintage-style, two-conductor, and braided wiring, just like the greatest humbuckers of all time. In a variation from the majority of original PAFs, however, the ’57 Classics’ coils are wax potted to combat microphony and feedback squeal at high volumes so, while vintage voiced, they are suited to high-gain playing, too. The timeless pairing of Tune-o-matic bridge and stopbar tailpiece, both in gold, anchors the strings at the body end for solid sustain and precise intonation adjustment. A set of gold-plated, vintage-style tuners with pearloid buttons retains the accurate look and performance up at the headstock.

Read our article on the Moderne here

Each guitar comes protected in a plush-lined hardshell case with black exterior, and includes owner’s manual and adjustment literature, along with Gibson’s Limited Lifetime Warranty and 24/7/365 customer service. 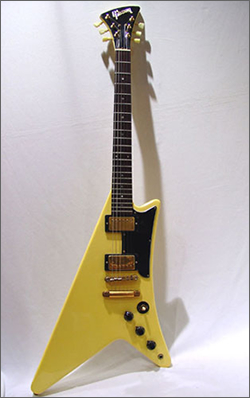