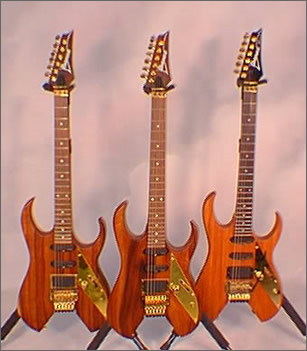 Hello, I was wondering if you knew how I could cross reference my Ibanez Reb Beach Voyager Guitar?? The Serial number on the neck is F119257. I was told it is a Model RBM2NT. Can you help me .
Thanks ,
Jeannia

I have one!
My RBM400 was made in Japan! and has the Ibanez pickups not the active ones (I think it’s better that way and I know that Reb will disagree with me)
I got it in Israel while I was working in a big musical instruments store, there were 25 that came to Israel in a shipment I ordered all of them to the store and took the best overall sounding and build one
we sold the rest of them in less then 2 weeks it is by far the best sponsored Ibanez ever made better then the Jem JS PG etc.

Has anyone see the video interview with Norman Harris shown on http://www.vintageguitarexchange.com? Pretty cool. Harris talks about how he got started which in his case is very interesting and at the end shows 2 amazing guitars including a 1960 Les Paul with original “hang tags”.

In answer to Jeannia… the serial number only indicates the year of manufacture.. your serial number indicates that is a model made in 1991. Knowing that is 1991 we can say that withouth watching a picture could be a RBM1 or RBM2NT. To know for sure if yours is a RBM2NT just see on the body that must be Natural Finish if you can realize that body is only one piece of wood or in fact there are two different sections, the upper one thinner than the rest. If yours has two different woods is the RBM2NT version with the Koa top and mahogany body, if not itÂ´s another model. CheersÂ¡Â¡Â¡

Looking to find the value of my Ibenez RBM10 series C473449. It is in excellent condition,all original, Black and Gold. I checked about 5 years ago and it was $1,400.00. Can you tell me what it’s worth today?