Much has been said about the Obamaâ€™s gift giving recently. An Ipod for the Queen, the DVDs given to Gordon Brown after his visit to the White House. 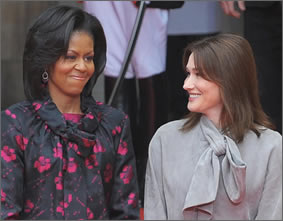 But Michelle Obama may have struck the right chord with her gift to her newest friend, Carla Bruni -Sarkozy.

Bruni, a former model, is also a singer/songwriter. and on each of her three CDâ€™s, the last of which was released just this past June, she plays the guitar on many of the tracks.

The First lady presented Bruni with the gift Â when the ladies visited the Cathedral de Norte Dame de Strasbourg with the rest of the NATO Summit spouses.Â

The two first met the day before when Mr. and Mrs. Obama visited French Palace Rohan. The first ladyâ€™s office said that the two women really hit it off and enjoyed a private lunch together that lasted for over an hour together.Â

The guitar is a Gibson “Legends” J-45 Acoustic.

Gibson has painstakingly reproduced this knockout vintage acoustic down to the minute details. The Gibson J-45 is one of the most played and cherished acoustic guitars in history. This Legends version of the J-45 can handle music from the blues to bluegrass to folk to pop and everything in between. Â  Hand crafted by Gibson luthiers using techniques from the J-45 guitar’s heyday, the Legend J-45 boasts an Adirondack spruce top and solid mahogany back and sides to produce unmatched mellow, full-bodied tone.

Did you ever have one of the “what if” conversations? Like, “what if I won the lottery” kind of things. Â Some three years ago the luthiers at Gibson’s acoustic guitar plant in Bozeman, Montana had one of those kind of conversations. It went sort of like this: Â “What if we could go back in time and build a brand new guitar exactly the way they were built back then”.Â

Well, nothing gets the juices flowing like a challenge like that, so the quest was on find the best sounding, original, mint condition Gibson acoustic guitar from the “vintage years,” and build a limited number of guitars today employing the same material, same types of tools, same specs, you name it. The plan was to build a new vintage guitar.

After a long search, a mint, 1942 J-45 was located. Owned by renowned acoustic guitar expert and author Eldon Whitford, the guitar was perfect. It was historically significant, as 1942 was the first year of production for the J-45. The fact that the J-45 is the number one selling acoustic guitar in Gibson’s history didn’t hurt either! Mr. Whitford was kind enough to loan the guitar to Gibson for a painstakingly thorough examination. The guitar went through both X-ray and cat scans Â to accurately determine the bracing patterns, wood thickness. The glue and finish were chemically analyzed. To make a long story short, Gibson learned everything about that guitar. The result? The guitar you see here the “Legends Series” 1942 J-45.

Give Eldon the Nobel Peace Prize!

Eldon for Ambassador to France!

In a report on Carla Bruni on German TV yesterday there was the information that Carla Bruni was unable to play this Gibson model during a beneficial gig or in a rehearsal shortly before and changed to the model of her own gear she carried with her for this tour. No wonder, such a new guitar needs to be warmed up for months to get the right sound (like Narcosy surely did with Carla, too).