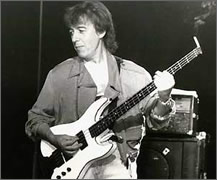 If Nick Mason (has kids? not grown kids?) wants his kids to stop he should parent. If Bill Wyman has a study showing that people are choosing Guitar Hero over an instrument who normally wouldn’t, cool. Everyone is always bitching about new technology and saying it’s the downfall of the world. The only time they were really right was the a-bomb.

An instrument requires talent and practice… guitar hero may have an element of practice, but certainly no talent.

Kids typically become bored with a video game after about 2-3 weeks, so I don’t think these games are gonna threaten the pool of developing musical talent. My kids, one a 17 year old bassist with 6 yrs experience, love Guitar Hero and Rock Band, but approach them for what they are – video games. In spite of the popularity of these games, I’ve never seen more kids into playing music as I have now – we literally have about a 100 fledgeling young bands in medium-sized prairie town. Cool!!

I think in some cases it opens kids up to bands that they otherwise wouldn’t learn more about. Maybe in other cases, kids only practice the game while never learning a real instrument.

I personally don’t think that playing guitar hero discourages kids to learn. It actually brings out the music in them.

But on the other hand, this is a video game that may give them less time to do school work.

If their parents can balance them both, it can only do them good.

Only time will tell.