This guitar was used by Hank Marvin of the Shadows during the 60’s, along with his iconic Red Fender Stratocaster 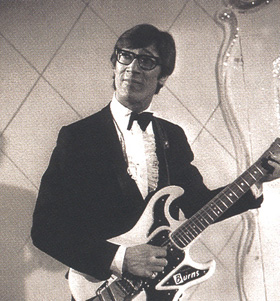 The Burns is a whole lot rarer (and cheaper) than a sixties Les Paul – it isnâ€™t worth the tens of thousands one of those commands, but they only made 350 or so, so if you want one it’s possible to find the official Burns-made reissue model, and alos a 40th anniversary special edition.

The Marvin featured a whole host of innovative features, including a sculpted â€œscrollâ€ headstock, a knife-edge vibrato and tuning pipes in the body.

These are seriously rare guitars, and chances are youâ€™ll never find a â€œrealâ€ one. However, if an old one does come your way and you have the cash, then why notâ€¦